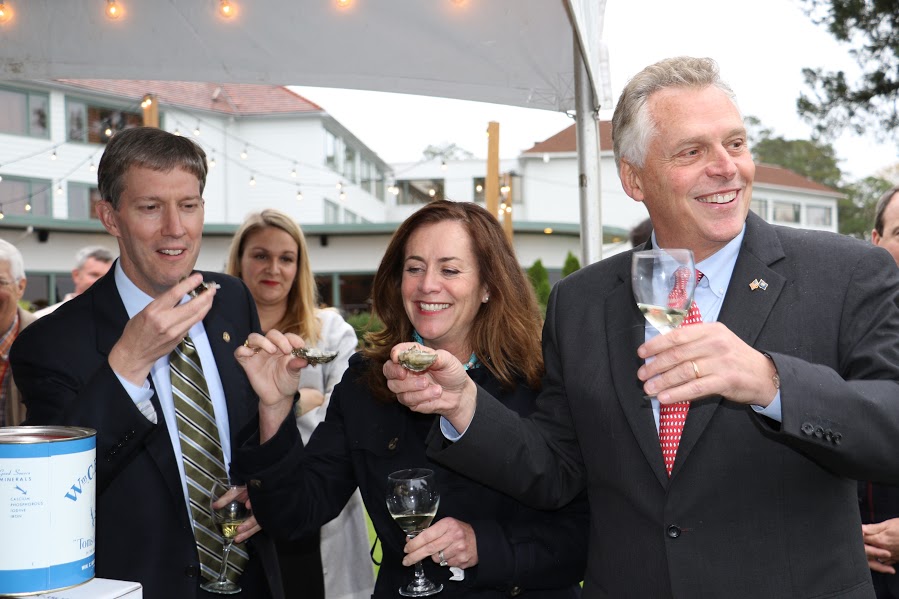 Governor Terry McAuliffe announced today the award of a $35,000 planning grant from the Governor’s Agriculture and Forestry Industries Development (AFID) Fund to the Virginia Oyster Trail project by the Northern Neck Planning District Commission (PDC) and partner communities throughout the Middle Peninsula and Eastern Shore.  The AFID planning grant program encourages local governments to promote agriculture and forestry and incorporate the needs of these industries into their strategic economic development plans.

“Identifying and supporting initiatives that strengthen agriculture while promoting tourism build on these crucial sectors of our economy, and pave the way for future innovative collaborations,” said Governor McAuliffe.  “Programs like the Virginia Oyster Trail will continue to diversify the economy in these regions and attract visitors and jobs to these communities. Supporting Virginia’s diverse agricultural sectors is a key part of my plan to build the new Virginia economy.”

“I applaud the Northern Neck Planning District Commission and their partners in Accomack, Gloucester, Lancaster, Northampton, Northumberland, Richmond, and Westmoreland Counties for their strong commitment to Virginia’s agricultural and forestry industries – which include oyster aquaculture – and we are pleased to give them the tools to help support those industries,” said Secretary of Agriculture and Forestry Todd Haymore.  “The Virginia Oyster Trail program will continue to promote and foster agritourism in the area, and will further increase rural economic and regional development.  Agriculture and tourism are Virginia’s top private sector industries and both are playing key roles in the Governor’s plan to build a new Virginia economy.”

The Virginia Department of Agriculture and Consumer Services (VDACS) administers the AFID program and planning grant applications are accepted on a rolling basis.  Successful funding requests must demonstrate a clear need, a proposed solution, strong support from local government and the agriculture and forestry community, and the ability to provide cash or in-kind matching funds.   Localities interested in applying may visit http://vdacs.virginia.gov/agribusiness/planning.shtml or contact AFID Fund Coordinator Stephen Versen at stephen.versen@vdacs.virginia.gov or 804.786.6911 for more information.

Details on the grant award is below: 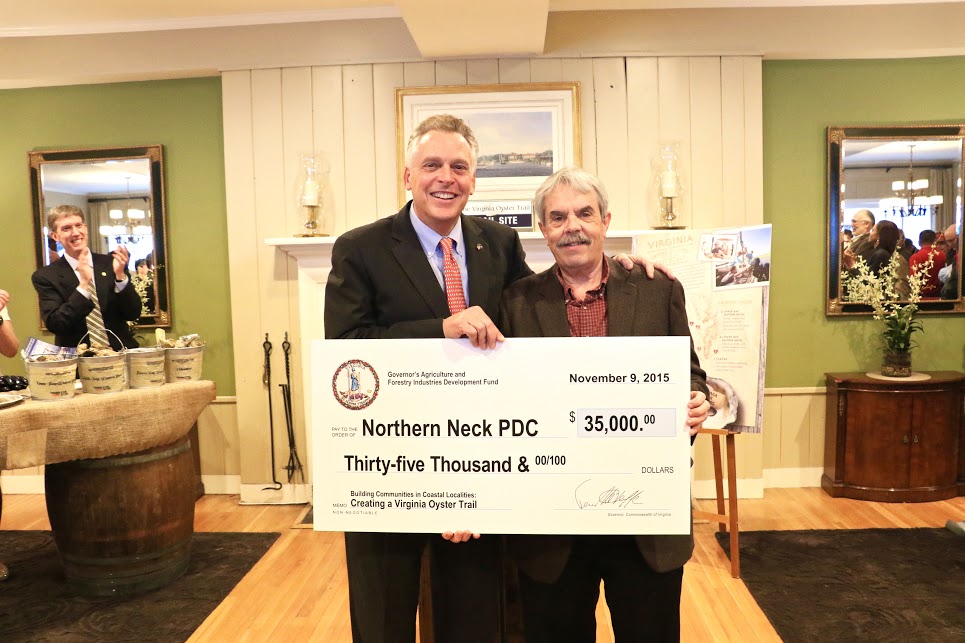 Speaking about today’s announcement, Governor McAuliffe said, “Successful regional partnerships have been created and prospered through the Building Collaborative Communities program.  Regional collaboration is a key in our efforts to build a new Virginia economy, and we continue to see the impact it has on building strong and sustainable communities throughout the Commonwealth.”

Economic research shows that in areas around the country where localities work together cooperatively, the promotion of  a sense of place, business growth and leveraging additional funding for regional economic development initiatives account for approximately 76 to 92 percent of new jobs. Quality of life indicators such as income disparity between localities, area median income and job creation are more positive in areas that interact on a regional level. Regional, community-based strategies that capitalize upon the unique assets of communities offer stronger opportunities for success and long-term sustainability.

“The communities with the highest functioning team are the ones that experience economic growth and prosperity,” said Secretary of Commerce and Trade Maurice Jones. “Collaborative efforts represent the best opportunity for this growth in all regions of the Commonwealth.”

“The Northern Neck High-Tech Center holds the promise of benefiting our region by highlighting its potential in the 21st-century economy,” noted Senator Ryan T. McDougle. “This grant is further evidence of the viability of this project and an important initiative to bring jobs to the Northern Neck region.”

“I am appreciative of the administration’s investment in the Northern Neck region and look forward to seeing ta long-term, viable High-Tech Center with new jobs,” said Delegate Margaret Ransone.

The following projects were awarded funding through the Building Collaborative Communities program: 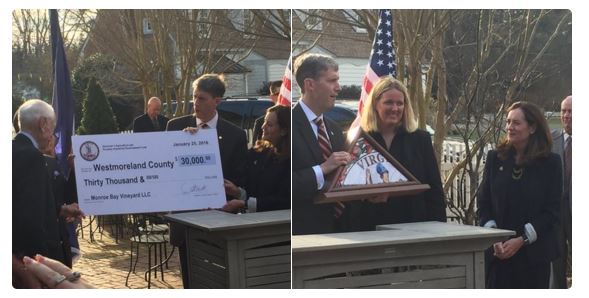 Governor Terry McAuliffe announced today that Monroe Bay Vineyard LLC will expand its farm winery in Westmoreland County.  The company will invest more than $385,000 to build a tasting room and production facility for its wine and hard cider operations, creating seven new jobs in the region.  In addition, Monroe Bay Vineyard will purchase more than $1.4 million in Virginia-grown grapes, apples and other fruit over the next five years.  This is the first economic development announcement in Westmoreland County during Governor McAuliffe’s administration and the first Agriculture and Forestry Industries Development (AFID) facility grant announcement for the county.

Speaking about the announcement, Governor McAuliffe stated, “I am pleased to announce Monroe Bay Vineyard’s investment in Westmoreland County, which creates new jobs and new opportunities for the Virginia wine and cider industries, two of the faster growing sectors of Virginia’s agricultural economy.  This investment bolsters Virginia’s reputation as a top wine destination on the East Coast and highlights the importance of the growing link between agriculture and tourism on the Northern Neck.  This project, with its capital investment, new jobs and strong commitment to sourcing locally, represents another economic win for the region.  My administration is committed to fully employing our diverse agriculture industry, one of the Commonwealth’s greatest assets, to help build the new Virginia economy. ”

Established in 2013, Monroe Bay Vineyard produces wine and hard cider next to James Monroe’s birthplace near the town of Colonial Beach in Westmoreland County.  The company will expand its existing vineyard and orchard, working directly with Virginia producers to grow more than $1.4 million in grapes, apples and other fruit, or approximately 84 percent of its total agriculture needs, over the next five years.  This expansion will enable the company to dramatically increase production of its wines and hard ciders.

“It’s great to see Westmoreland County continuing to develop and diversify its agricultural economy,” added First Lady Dorothy McAuliffe, who also attended the announcement.  “Connecting locally grown food with locally produced wines and ciders, along with craft beer and distilled spirits, represents a huge opportunity to further leverage Virginia’s culinary resources for tourism and economic impact.  High quality products, like the ones Monroe Bay Vineyard is producing, contribute significantly to growing the new Virginia economy, and I am pleased that customers across the region will have access to these Virginia-grown products.”

“This expansion for Monroe Bay Vineyard represents another step forward for Virginia as we cement our reputation as key players in the nation’s wine and cider sectors,” said Virginia Secretary of Agriculture and Forestry Todd Haymore, who announced the grant on behalf of Governor McAuliffe.  “Virginia wine sales are up by more 25 percent since 2010, and sales of Virginia cider increased more than 200 percent from 2014 to 2015.  Indeed, these craft beverages and others are contributing positively to cities and rural communities across the Commonwealth, adding to the Governor’s call to build a new Virginia economy.  I am pleased that the AFID fund was able to support this project, the first economic development announcement in Westmoreland since April 2013.”

The Commonwealth is partnering with the Northern Neck Planning District Commission, Westmoreland County and Monroe Bay Vineyard on this project through the Governor’s AFID Fund, which is administered by the Virginia Department of Agriculture and Consumer Services.  Governor McAuliffe approved a $30,000 grant from the AFID Fund to assist with the project, whichWestmoreland County is matching with local grant funds.

Kiki Apple, owner of Monroe Bay Vineyard, added, “We are honored to have the funding to bring our dream of a tasting room on the Monroe Bay to reality.  We are the first winery on the Northern Neck to offer hard apple cider in addition to our wines.  Being located on the land of James Monroe Birthplace Farm, our goal is to restore it back to a working orchard, and we have already planted ‘Virginia Hughes Crab’ apples in the orchard – the same variety James Monroe grew and loved.”

Senator Richard H. Stuart (R- Montross) commented, “This is a very exciting opportunity for Westmoreland County.  Both the wine and cider industries have grown immensely here in the Commonwealth and have been significant contributors to Virginia’s agriculture and tourism industries.  I am thrilled for the Northern Neck to partake in this great economic development.”

Delegate Margaret B. Ransone (R – Kinsale) added, “I’m pleased that the AFID fund could help support the important and growing wine and cider industries in the Northern Neck. The partnership between Monroe Bay Vineyards and Westmoreland County encourages economic development, and I look forward to this initiative and its future success.”

According to a 2012 economic impact study, the Virginia wine industry employs more than 4,700 people and contributes almost $750 million to the Virginia economy on an annual basis. Nationwide, Virginia is in the top five states in number of wineries and wine grape production. In 2015, Virginia wine sales reached an all-time high of more than 524,000 cases, or nearly 6.3 million bottles. More than 1.6 million tourists visited Virginia wineries in 2015.

Since the beginning of the McAuliffe administration, 587 economic development deals have been closed in Virginia with more than $9.8 billion in capital investment, which is more than any previous governor in the first 24 months in office. 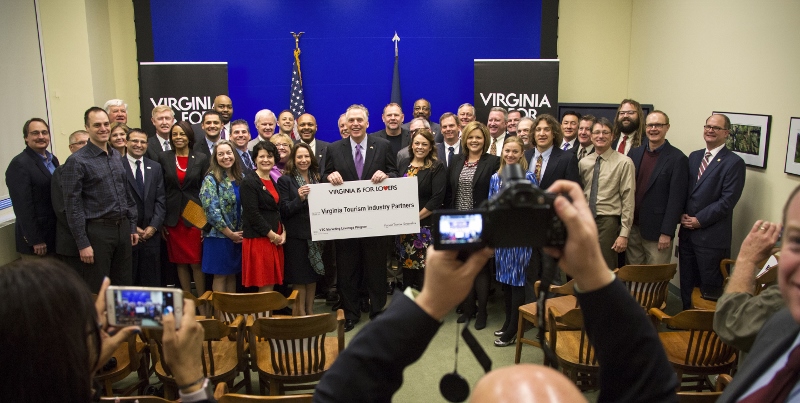 Governor Terry McAuliffe announced today that more than $812,000 in matching grant funds will be awarded to 39 local tourism initiatives as part of Virginia Tourism Corporation’s (VTC) Marketing Leverage Program. The grants are designed to help local and regional tourism entities attract more visitors by leveraging local marketing dollars and will ultimately impact at least 153 other statewide tourism entities. The local organizations match the state grant funds by a minimum of 2:1 in order to support marketing projects. This funding cycle, the local partners will match the VTC grant dollars with more than $2.6 million, providing more than $3.4 million total in new marketing to increase visitation to Virginia.

Speaking about today’s announcement at an event in Richmond, Governor McAuliffe said, “Tourism is an industry that provides enormous opportunity to grow, diversify and build a new Virginia economy.  The Marketing Leverage Grant program is designed to spur job creation, economic development, and visitor spending through new or enhanced tourism products.  These grants are proven to increase visitation by creating marketing partnerships and effective marketing programs.”

Tourism is an instant revenue generator for Virginia. In 2014, tourism generated $22.4 billion in revenue, supported 217,000 jobs and provided $1.5 billion in state and local taxes. Dollars invested in tourism are proven to provide a 5:1 return in tax revenue for Virginia, and the grant awards and matching funds provide a stimulus to localities seeking to increase tourism visitation and revenue.

“The Marketing Leverage Program grants support tourism product development and marketing in every part of the Commonwealth and contribute to the economic health of our communities,” said Maurice Jones, Secretary of Commerce and Trade. “These public-private partnerships will help attract visitors to Virginia who will spend money in our cities and towns to support job growth.”

Details on the grant awards are below. The next round of VTC Marketing Leverage Program grants will open in April 2016. Localities interested in applying may visit www.vatc.org for more information.